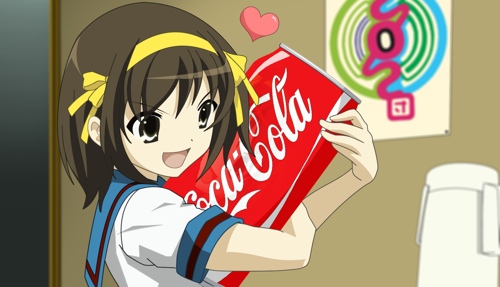 Look out, it's a gigantic coke can!

For those of you who don't know ZombiePlan, he's apparently a walking undead person who happens to have a plan. I'm envious; I'm neither a cool walking undead person nor do I have a plan. Unless drinking coffee, studying and typing incessantly on a keyboard to create a haphazard string of conciousness in the form of words on a blog counts as a plan.

ASIDE: If you spell plan by dropping all the letters except p and add the letters l, w and z, you end up with grilled cheese sandwich. Spooky huh?

Anyway I've never met this guy who lives in Adelaide but am fascinated by his various blog iterations and somewhat jealous that he's been able to churn out more interestingness (is that a word?) in fewer posts than have I. IBM. Really? How long have you been M? 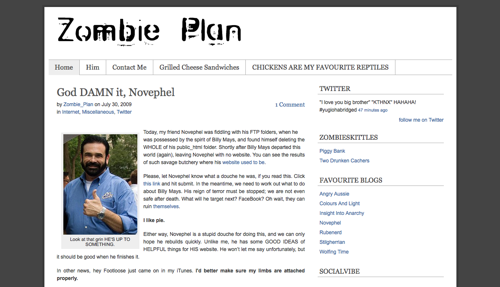 This part of his latest post though had me confused:

Today, my friend Novephel was fiddling with his FTP folders, when he was possessed by the spirit of Billy Mays, and found himself deleting the WHOLE of his public_html folder. […] His reign of terror must be stopped; we are not even safe after death. What will he target next?

And this part had me even more confused:

I'm sorry I crashed. What was I talking about?

Today, my friend Novephel was fiddling with his FTP folders, when he was possessed by the spirit of I like pie.

I still don't get it.