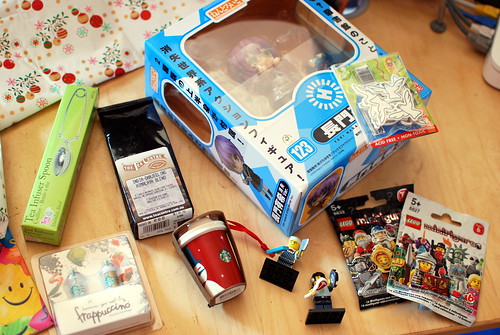 For the first couple of years since we lost mummy on Yule Eve-Eve, the 25th of December was a pretty sombre affair. Last year was bittersweet.

This year, for the first time, I felt as though Yuletide joy was with us again. My dad, sister and I sat around and exchanged presents to an awful vinyl record of 1980s pop stars butchering holiday classics, then had a nice late breakfast (Schade family savoury French Toast!); talked and joked for hours about life, the universe and everything; played some traditional Nintento Wii bowling; and chowed down on an amazing home cooked turkey dinner made in the way only my parents know how.

Along with a can of original, imported Irn-Bru and a registration code for OmniFocus (YES!), my sister and old man also bought me a MacBook Air which should be arriving on the 31st. Speechless!

A few days prior, over some coffee, tea and cuddles at a lovely French cafe in Sydney, my beautiful girlfriend Clara gave me some of the most thoughtful presents ever. She is responsible for practically my entire nendoroid collection at this stage, and to have one of Nagato Yuki from the enduring Suzumiya Haruhi franchise is particularly apt ^^. I'd argue she's cuter than Yuki though.

Above all else though, as with my family on the day itself, the best present I could have ever wished for was her company. I hope to share in that with her for many years to come :'). Happy belated holidays!