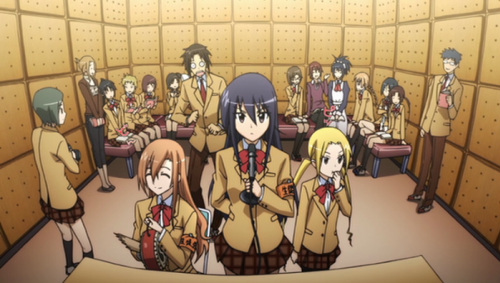 Yesterday, the Anime@UTS club held their Annual General Meeting, where we dissolved the executive team and voted in new people to run the club for 2014. This was my third AGM after 2012 and 2011, desu.

Last year, I was elected to be the official club webmaster, and this year I was humbled to be reelected unopposed, desu.

I took the job as webmaster expecting it to be about maintaining the club’s site, mail and backend infrastructure. While that’s certainly been the bulk of what I’ve done, I also wanted my legacy to include more historical significance. Recovering old posts and media, as well as cleaning up and cross posting existing material, its my hope the club site can become a living museum of what the club has done for so many people over the years. In a way, the webmaster is in a unique position to be a custodian of the club’s history, long after the current social network fad is over and we’re all “liking” things something else. At least, that’s my dream.

We said goodbye to some familiar faces. Alexander/Lexi Kemp has been the club president for most of my life at UTS; for me Alex was the club. He graduates at the end of the year, and we sincerely wish him all the best.

Clara’s years of faithful executive service also ended today. Her tireless efforts, sleepless nights making merchandise, organising and collating documents, communicating through social networks, taking minutes, creating art and card designs; few people have left such an indelible mark on the club in recent times as she has. Despite not being an “official” executive, I expect her to still play an integral part in the club’s activities; I already know I’ll desperately need her help with the latest site revisions.