Black Apollo had a great mental exercise on Twitter which sounds like a great opportunity to over-analyse something. 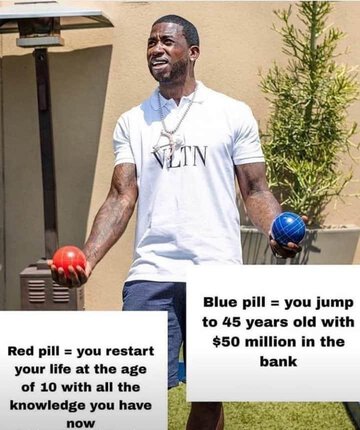 I could say with confidence the Blue Pill would be easier. Age 45 is still super young, with so much life ahead to enjoy the money and put it to good use. I’ll be that age in a decade and a half, and I’m sure that time would have flown otherwise. But it comes with two huge caveats.

The biggest would be the responsibility such wealth would bestow. I used to joke that I’d infinitely prefer being rich to famous, but that being rich would come with its own problems. There are so many deserving people and causes in the world, and I’d worry I’d live my life guilt-ridden with the opportunity costs associated with helping one over another. Not to mention worrying about maintaining that wealth in investments and savings, or conversely worrying whether the wealth managers I’ve hired aren’t doing something sneaky. Maybe that’s why so many of the ultra wealthy are detached sociopaths.

Then there’s the issue of that lost time, and who may have moved on, or how the world may have changed in that intervening time. Would I change the course of history and not meet Clara? There’s also small but vocally-dystopian voice in my head saying that 2020 is just the beginning, so to enjoy what little of the good times we have left. Or it could be one of those “careful what you wish for” life lessons where you arrive with your $20 million, only to learn that hyperinflation or COVID-fuelled world wars for resources and medicine has rendered it worthless. Wow that went dark quick!

So let’s check the Red Pill. The primary advantage here is all your experience and knowledge, albeit at ten, would have come from you. While we’re dealing in the land of hypotheticals, I never found casting a spell to gain a skill that appealing; I feel no pride or joy from work that I feel I didn’t earn. But again, two things to consider.

The biggest logical downside for Red is you’d have future knowledge, which would be great for stock picks, but would introduce all sorts of time-travelling paradoxes. While I admired and respected physics in high school and later in life, I was a chemistry guy. I live in observable physical reality, and I’m not sure I’d have the mental capacity to deal with changes I’d be making to the world, inadvertently or deliberately, to say nothing about the responsibility I’d feel to save people and inevitably falling short. The Early Edition TV show from the early 2000s explored this better than anything I’ve seen.

But personally, is a phrase with two words. How would I cope with adults treating me like a ten year old, despite being in my thirties inside? Would I be taken seriously? Would my prognostications be seen as a sign of an unsound mind? My and my sister’s childhoods were also, in parts, relatively awful as well given ongoing family health issues, and school was awful. My life today is objectively better.

Perhaps both outcomes are the same. The Red Pill could leave you wealthy but broken, leading to a 45 year old with $50 million in the bank that ends up being worthless. Was this the real life lesson here?