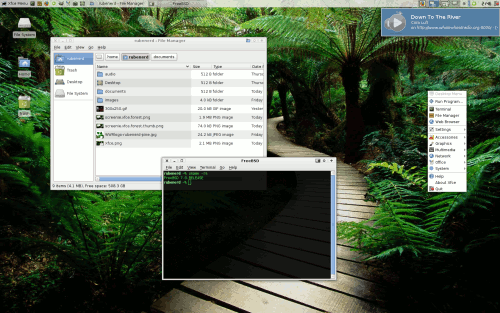 (Screenshot taken from my Fun with Xfce post, June 2008)

A release date has been set for everyone’s favourite *nix desktop environment. Simon Steinbeiß on the Xfce dev list:

we’re writing to you proposing a concrete release date for 4.12 about a month from now, the weekend of February 28 and March 1. As we have discussed the status and progress of core components with many of you individually, we feel confident that the state of Xfce is good enough to polish some final edges and push more translations until then.

Among the big changes is the transition to GTK3+. They’ve been chided for being two years late, but given their amount of resources I’m more than happy to see them get it right first. Heaven knows I think we’ve all become a little jaded with the half–baked software that’s passed off as releases these days.

It also raises some interesting questions. Given Gnome 3’s poor reception and subsequent spinoffs, a GTK3+ Xfce may well again represent a compelling alternative. Not to say GTK2 Xfce didn’t already, but some visual consistency that doesn’t depend on installing themes in parallel will be a boon.

(I used Gnome 3 for a while, and found it quite usable. I wasn’t back on my Xfce laptop for long though before I remembered what I was missing. A lighter–weight, systemd–free GTK3+ desktop would be great).

What will also be interesting to see is if other GTK applications use this as an impetus to move to GTK3. It’s not a trivial task.