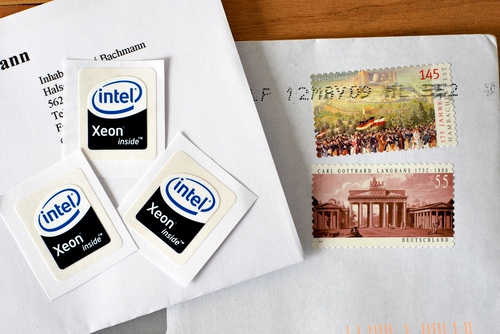 I like to think one of the things I inherited from my beautiful late mum was her absurd, ridiculous sense of humour! Mmm, grilled cheese sandwiches.

With this in mind, last week I noticed someone on eBay in Germany was selling a set of those "Intel Inside" Xeon processor computer stickers for a couple of Euros. For those of you who don't know, the Xeons are Intel's server class CPUs that are found in the Mac Pro and other high end desktop and server hardware.

My first reaction was to snap them up without question, with the intention of affixing them to… my 600MHz Pentium 3 Compaq Armada M300 subnotebook! Genius right?

Well they just arrived in the mail this morning complete with stamps from Germany! My father is from Hesse and he was quite the stamp collector in his youth so I imagine I inherited part of his fascination with them.

As for the stickers themselves, if you know you're shameless Intel advertising these stickers here are the second generation logos using the new Intel logo, before they moved over to those new crystal or landscape-oriented holographic ones. Wikipedia has a photo comparing the the styles. I reckon the ones I got are the classiest.

I'll wait until I have some more of that foaming computer cleaning product so I can give the case on the notebook a quick once-over before putting the Xeon sticker on. I don't know why I find the prospect of putting a Xeon sticker on such old hardware so hilarious, but it just is!