With all this excitement about cloud storage, I thought I'd try something a little different!

Wuala is a cloud storage service by LaCie that comes with 5GB of free storage, with the option to purchase more. Like the sucker for advertising I am, I saw a label for the service on a LaCie external hard drive at an Apple Store, and was immediately interested!

What sets Wuala it apart from Dropbox and Google Drive is it encrypts your data before it's sent to their servers. Technically speaking, this means not even Wuala employees can access your data, unless you make it public (which you can do).

As an added bonus in a similar vein, Wuala's severs are based in Switzerland, Germany and France. While Europe's privacy laws are by no means perfect either, these days I feel safer having my data there than the United States. 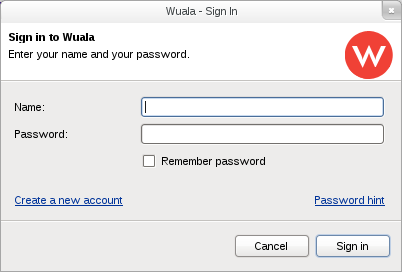 As I've mentioned previously, I dislike installing client software for online services, especially for something that may as well be public anyway. Given Wuala is performing local encryption before sending my data off however, I see their software as a necessary evil.

Once you install their client software (the subject for a future post), you're given the open to create a new Wuala account. Registration is fairly straight forward, and after responding to a confirmation email you're in your new cloud drive. 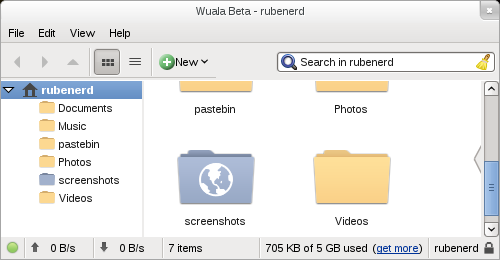 The client software runs in Oracle's Java or the OpenJDK (my choice) and should be pretty familiar to those used to the Finder, Nautilus, Thunar and the like. You can create folders, upload/download files, and set folders and files public or private (the default). They also have iOS and Android client applications.

What I really like however is it's ability to mount as a virtual local volume. Having tried on a fairly vanilla Fedora install, Wuala was able to create a new Fuse mount without any trouble, though the first time it took a minute or so to create it. Then I was able to drag and drop files from within Nautilus: 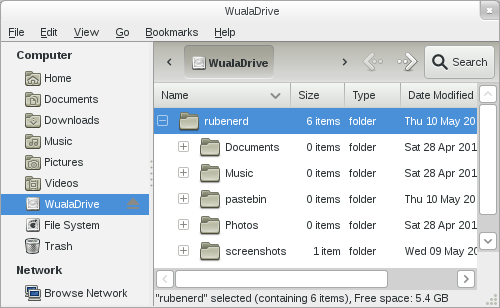 And explore with the shell. Imagine what you could do with this!

It has lots of other features, though I haven't looked much more into it yet. Something called "Time Travel" looks as though it could be a revision system of some sort.

So far I'm impressed. I'll report my day-to-day experience in the coming days.