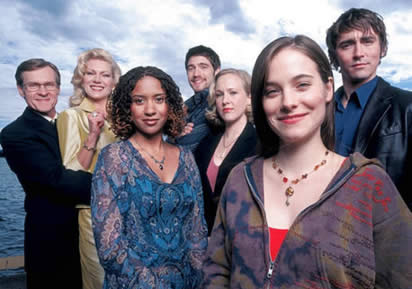 With all the junk clogging up television these days I've been watching it less and less. Or maybe it's because I have way to much work. Or both.

Anyway I was channel surfing late at night a few weeks ago and I saw this TV series "Wonderfalls", and I was hooked. It is one of the best written shows I've ever seen, it's bizzare, it's funny, it has talking monkey statues…

The show tells the story of "Jaye Tyler" who has a higher education degree but is stuck in a dead-end job in a Niagara Falls gift shop. The main quirk of the show is that Jaye sees statues of animals, printed animals on boxes etc… talking to her; which of course complicates her life when others see her "talking" back.

Other characters are Jaye's love interest who is married (again) to his first wife, her parents and her councilor who is fed up with Jaye's antics.

Jaye is played by Caroline Dhavernas, a Canadian. I know she's 8 years older than me, but I really like her :). And she's a great actor… or maybe she really is that insane… and her arch rival is none other than Jewel Staite… as in the engineer on the Serenity in Firefly!

In the US only the first four episodes were shown on FOX before it was canceled (Just like Firefly!!!) but all 13 episodes were released on DVD and are now all being subsequently shown on Network 9 back in Australia.

I'll definitely have to do a full review of this on Rubenerd Show #75 tomorrow. Brilliant show. And so is Wonderfalls ;).