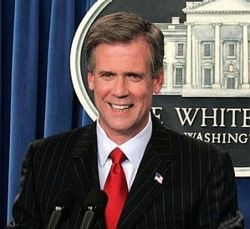 Read in the Straits Times today that Tony Snow, the United States' Press Secretary has been having some pretty rough times medically over the last couple of years, times which got a whole lot rougher recently when it was announced the cancer he had been treated for in 2005 had metastisised in his liver. It literally made my blood run cold for a second, because its that exact condition that my mum is being treated for.

Metastasis occurs when tumour cells spread to other parts of the body and, as my family has felt first hand, is infinity more terrifying than the initial test results showing cancer; it means the dangerous cells have the ability to migrate. Essentially my mum will be having tests for the rest of her life because we can never be 100% sure the cells will ever be completely destroyed.

Let me make it clear, I think George W. Bush (along with my home country's Prime Minister John Howard) is a war criminal and that his administration is dangerously incompetent when it comes to handling world and domestic affairs, and I agree with virtually nothing that Tony Snow has said or apparently believes. But I can imagine what his family is going through, and I would not want anyone to have to live through that. Nobody deserves it.

I wish you and your family the best Mr Snow.