A lot of talk in the paper here recently has been about the progress (or argued lack thereof) of the Wireless@SG free nationwide WiFi system which the Singapore government and SingTel are in the process of setting up. Reading the stories the last few days you would get the impression that city-wide wireless networks would be easy to set up and that the slow pace of construction is unwarranted.I'm fairly sure people are taking for granted how complicated and difficult a wireless network is to set up. People tend to dismiss Singapore as a very small country, while forgetting that the city isn't.

The very high population density (6,369 people per square kilometre) coupled with people's ferocious appetite for high tech gadgets and devices is both a blessing and a curse in this situation. As with most utilities such as electricity and water, wireless internet access would be much more viable economically in a place with a high population density than a low one given the fact you can supply many more people with less investment, but with wireless networking it isn't so easy.

With electricity and water you have dedicated delivery systems, with wireless networking you are using a shared resource (the air) that has to compete with hundreds of other wireless networks people have set up. There are only so many frequencies that you can utilise, and the environmental conditions at each hotspot such as geography and relationship to other buildings would have to be taken into consideration. 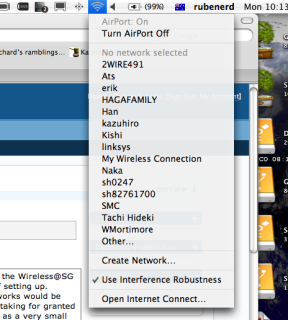 Setting up individual wireless hot spots in fixed locations liked shopping centres or shops within shopping centres is easier, but would generally suffer from the same setup problems. That said though I've been to several Wireless@SG hotspots and have never had connection problems at all. Perhaps I've just been at the right places at the right times. ;)