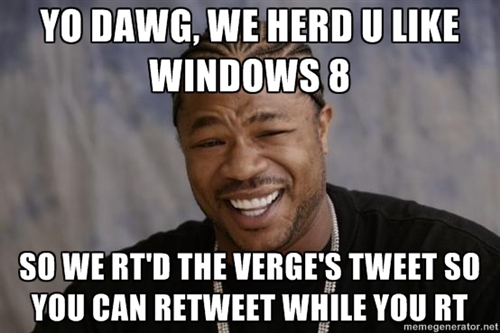 Why comment on the name when there's already a prefabricated meme? ;)

Having bought myself a large cup of caffeinated beverage at my local café without even specifying what I wanted (I've always wanted to be a "regular" somewhere!) I dug into Microsoft's news about the upcoming release of Windows 8.

According to the Window Steam blog, which I can only assume discusses how best to clean panes of glass, Microsoft will be releasing Windows 8 in three versions; a regular, a premium and one specifically for ARM tablets dubbed Windows RT.

Two quick asides about the hardware. First, isn't it a fascinating historical twist that an Apple spinoff eventually became so successful Microsoft had to break their Wintel model and release a version of Windows for it? Windows on different architectures isn't new; Windows/386 was specifically targeted at that CPU and Windows NT Workstation was offered on the DEC Alpha and PowerPC, but it shows even the once invincible Microsoft wants to hedge their bets in this emerging market.

Secondly, you've got to think Intel are keeping an eye on this trend!

Back to the Editions

Microsoft have been very successful in convincing people that having editions of their operating system is a great idea, though fortunately they're only releasing Windows 8 in three versions. It's still too many, but it's a start. See what I did there?

Why is it still too many? One word: encryption. With the need to artificially differentiate products in order to charge people differing sums of money, certain features have to be removed from the final product in order to entice people to upgrade; again a practise plenty of people are willing to defend for some reason.

While Microsoft seem to have been fairly consistent with only including enterprise and more advanced features in their higher end Windows versions, some features that really should be part of the base product have also been removed at times. Not being able to change desktop wallpapers in Windows 7 Starter, for example. You can't make this stuff up.

Unfortunately, the feature they've decided to leave out of the standard version of Windows 8 is far more critical than whether or not you can put a cute anime girl as your desktop background.

Okay, I used this entire post as an excuse to show Madobe Nanami again. Honestly, of all the reasons I've had given to me to move back onto Windows, this adorable Windows 7 mascot is the most convincing one so far. True story.

Anyway, when I saw the lack of an "X" under their "Encrypting File System" for the standard version of Windows 8, I was lucky I didn't regurgitate the mouthful of otherwise fantastic coffee I was sipping on. I wanted to reach through the screen, pull out a Microsoft engineer and ask them why not!

Certainly it's not a technical limitation, as far as I can tell. Mac OS X has it, most Linux distributions have it, even Google's ChromeOS (remember that?) has it. The pro version of Windows 8 has it.

Putting people's privacy and data at risk for the sake of product differentiation seems reckless to me. I hope — nay, implore — Microsoft to reconsider.

That is… unless they're leaving it out for other reasons. Perhaps the prospect of default whole drive encryption on virtually every new computer around the world was scary enough a prospect for law enforcement that they leaned on Microsoft to not include it on the most popular version. Heck, the rhetoric in the US has long been about how difficult encryption is making certain investigative jobs.

Of course I have no proof of this, but the speculation is irresistible!