This is an epic tale of tragedy and frustration, starring Ruben Schade as Ruben Schade and a newly student licenced copy of Windows 7 Professional as The Windows That Wouldn't Install. There will be no intermission, despite its length warranting one.

After further problems running some university software on my Windows 2000 Professional virtual machine on my Mac, I finally decided to give Windows 7 a shot. Fortunately the student pricing for Windows 7 Upgrade was still AU$49 until the end of the month. Now if only it would accept my serial number.

Here’s an ISO… wait, it’s not that easy!

To Microsoft's credit, the initial purchase of the Windows 7 licence went through without a hitch; I used my university email account to verify that I was a student, then paid with a credit card. Within a few minutes I was presented with a screen that gave me the choice to download an ISO, or an executable. Being on my Mac, I elected to download the ISO.

Of course, things weren't that simple. Instead of downloading an ISO as the button stated, my browser downloaded a tiny 300kb Windows exe file. It turns out this exe is a stub which needs to be run on a Windows machine to download the ISO.

I had already rzipped [sic] and archived my Windows 2000 VM, so I had to extract it out, then free up some space, then re-login from Firefox in the VM, then download the stub, then download the file which I then dragged back onto my Mac desktop.

Next I created a new virtual machine and used the ISO I downloaded to boot it. The Windows 7 installer booted fine, then started asking questions about CD-ROM drivers. Of course this has never happened to me on Mac OS X, and on FreeBSD I would simply fire up an emergency shell and manually mount the drive, but on Windows 7 I was stumped. Fortunately all I had to do was restart the virtual machine and it booted just fine. I was The Confuse.

Here's where I got stuck, and where I currently remain. After booting Windows 7 a second time and inserting my Windows 2000 retail CD-ROM to verify my eligibility for the upgrade, Windows 7 went ahead and installed without a hitch.

Upon rebooting, I was prompted for the product key I registered for. I entered it verbatim, and after what seemed like an age, the installer tersely informed me my serial number was invalid. I rewrote it and clicked Next again, but this time it didn't do anything. Rewriting it another half dozen times and pressing Next didn't do anything, other than showing that spinning cursor for a few minutes.

It's after 5pm which I'm assuming means the Microsoft technical support lines are closed, so first thing tomorrow morning I'll give them a call and ask them what's going on. I've got plenty of other work to do by tomorrow anyway.

I remember reading late last year that people had been having troubles with their student downloads of Windows 7, but I naturally assumed these problems would have been ironed out by now. For the sake of others, I hope I'm an anomaly.

So close and yet so far… 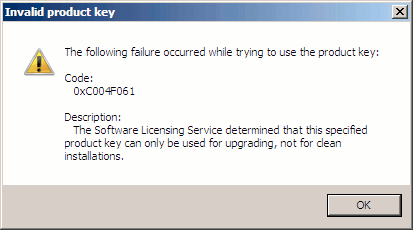 I think figured out why my student licence for Windows 7 was rejecting my product key. Talking to Nick Hodge I found out I could continue the install without entering a product key, so I finished then went to the Product Activation screen when Windows 7 booted. When I entered the product key, I got the above error.

The dialog is correct, I did a clean install, but I was under the impression I was allowed to.

Next step is to try installing Windows 2000, then doing an advanced install and deleting it. Windows installs are fun.