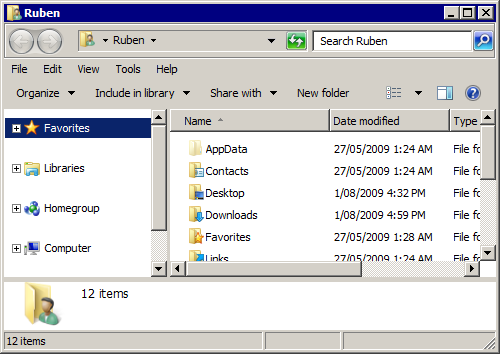 Allegedly Windows 7 would like to search me. I hope they keep it above the belt!

While we're on the subject, go the needlessly confusing interface. Granted I'm using the Windows Classic theme because I have too much self respect to use the tacky Aero and Aero Glass themes and I enabled the menu bar because I didn't want to deal with confusing little toolbar menus, but this has got to be one of the worst application interfaces Microsoft has ever released.

It's as if they had a list of elements written up on a whiteboard they needed to shoehorn into Windows Explorer and they just threw them in wherever they could fit. [Windows] Internet Explorer 7 and 8 are both in a similar disastrous mess. I'm not much of a fan of the ribbon interface, and I know separate units of Microsoft tend to act like separate companies, but the Windows team should employ the help of either the Xbox or Office team to fix this up.

The frustrating thing is earlier versions of the Windows Explorer interface weren't this needlessly complicated and busy. At the very least it shows they're capable. Or (gulp) they used to be.