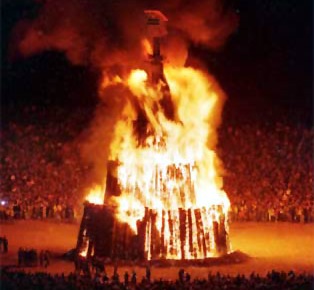 Jim Kloss's recent disillusionment with some of the people at Wikipedia recently made me think about my own brushes with Wikipedia's moderators. The first was when I created articles for the terms Audio Magazine and New Time Radio to highlight the limitations of the then-new term "podcast", but both were removed because they lacked notability. I respected the decision at the time and moved on.

My opinions changed in late 2007 when I noticed the featured article for the day was about the so called Aggie Bonfire. I had seen many articles removed for not being notable, but apparently an article about a ritualistic bonfire to show rivalry between two universities was somehow deemed not only notable, but worthy of featured article status. Suffice to say, I commented on the talk page:

Very thorough and well designed article, even if the event it reports barely counts as encyclopedic material. A fire to highlight rivalry, how childish.

I received two replies. The first was from someone right underneath my comment:

You read that right, this user compared my calling out of a ritualistic rivalry bonfire as childish, by saying some think war is childish. Yes, I'm sure veterans and people who have lost loved ones and family members in armed conflict would agree that it's on par with a university rivalry bonfire. Un-freaking-believable! 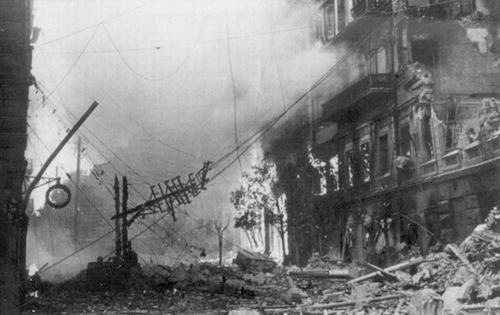 The streets of Kiev during World War II

He also exposed something which I think is at the heart of the problem Wikipedia is facing right now: the notability of articles isn't based on how important they are, it's how much material is about them online. An independent musician with a link to their own website and to a non profit website like Whole Wheat Radio is therefore less important than a… bonfire?

The second comment was posted on my own talk page:

Hello, Rubenerd. This is in regards this edit you made – please be aware of what Wikipedia is not, especially that talk pages are not forums for general discussion of an article’s subject. Your compliance with these policies would be appreciated. Thank you.

I didn't want to reply to the first guy, but to this person I replied with what I thought was a diplomatic answer.

I appreciate your response, however I believe my comments were in line with the legitimate questioning of a subjects notability for inclusion in a global encyclopedia. A rivalry between two universities which results in a ritualistic bonfire just doesn’t seem to be that important. I respect your opinion though and will try to adhere to Wikipedia protocols. Cheers

Wikipedia is a valuable resource that we're all better off having online, but it has some real problems. Or perhaps I should word that more accurately: some of Wikipedia's editors have some real problems. Perhaps it's time to rescue Wikipedia from some of it's own people? Viva la revolution!