As you may already be aware I'm an obsessively obsessed person with an obsessively obsessed obsession for Twitter, the micro-blogging platform where you type what you're doing. It's such a stunningly simple yet horribly addictive site that I've posted updates to over 3500 times, and have made friends with so many people who not only have I have never met in person but are not even in the same city, country, time zone or planet as me!

ASIDE: I mentioned planet because I follow at least one person on Twitter who claims to not reside on Earth. Given the fact we have barely even begun to colonise the moon, I find myself doubting this person’s residential claims, though maybe they work in a secret underground organisaion that my friend Frank Nora says is the real problem with the world right now. Damn those elitist underground people who want to undermine society to bring about a new world order and make us robotic slaves who will carry out their mission to build the world’s largest mozzarella ball!

ASIDE: How did I end up discussing secret societies, cheese and colonising other planets on a post discussing Twitter? Is this a sign of a creative mind, or a deranged one?

All that said though, I fear that people who harvest profiles and add friends en-masse are slowly wrecking Twitter. If you've been on Twitter for a while you know what I'm talking about: getting a constant stream of emails informing you that John Doe is following you on Twitter along with 1000 other people, and that John Doe is being followed by only a dozen or so people. 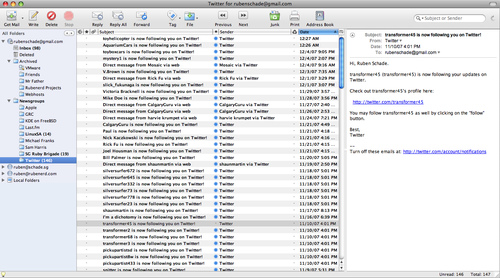 That image is a screenshot of my inbox showing just messages from Twitter over the last month. Out of these, a small number are notifications from friends, and the rest are people who want to add me who are following thousands of people with only a few following them!

In so many situations online when people seem to be harvesting addresses or profiles and adding people I can understand the motivation: usually it's either to allow the harvester to spam or scam users. I find it somewhat more difficult to see the motivation here though: what do harvesters gain by attempting to befriend me on Twitter? Unless I add them back I receive none of their messages which may or may not include spam or links to phishing sites.

Am I missing something here? I don't understand what's going on!