Simon Kuestenmacher always posts great maps on Twitter. Here’s one of the more arresting ones he shared from this Reddit thread by u/Spooderman89, showing the parts of the world where people live past eighty (dark green), or close to it (light green).

In the developed world—for want of a better phrase—we have blank areas around the American South, Nevada, the Northern Territory in Australia, and more of Eastern Europe than I expected. The Northern Territory has the greatest percentage of First Nations people in Australia, who continue to be downtrodden and ignored by passive coastalites. Much of South America and Asia are gone, save for a few areas around Chile, Israel, Bahrain and Qatar, if I’m reading it right.

Zooming in above Australia, we see Japan, South Korea and Taiwan in dark green, along with the PRC provinces of Beijing, Tianjin, and Shanghai. I had to look up the other province showing light green, it’s Zhejiang where Hangzhou is, which makes sense. You can also just make out the other Asian Tigers in Hong Kong, Macau, and Singapore right at the bottom if we zoom in. 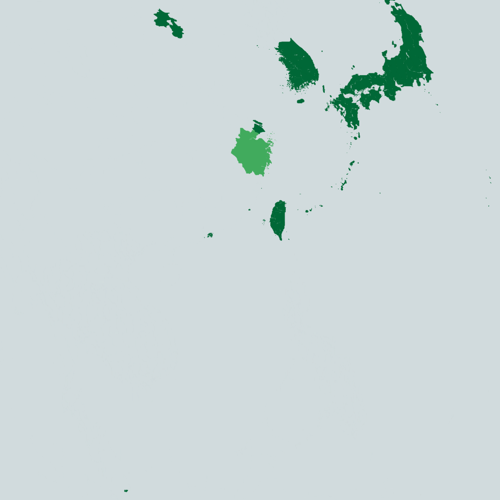 Of course this map doesn’t tell a lot of stories. For one, the high rate of mental health issues and suicides in high pressure, developed countries like Japan. But also the tremendous progress that has been made in the last century. Fewer people are living in poverty, and more people are living longer, than at any point in human history. But there’s still clearly a lot more work to do, and it starts with the developed world owning up to its ethical responsibilities to our fellow humans.