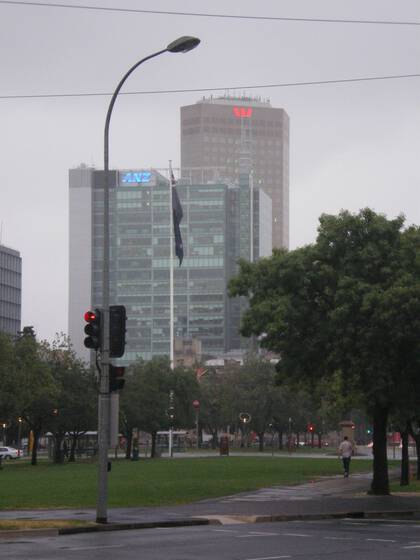 Photo is of the ANZ and Westpac bank buildings on an appropriately drizzly day in central Adelaide, by Dodge 76 on Flickr.

The new slogan Westpac was proudly trumpeting on television:

We’re a bank you can bank on.

Need to read that again?

We’re a grilled cheese sandwich you can bank on.

Don't believe me? After doing a bit of digging online to determine whether or not I had in fact heard what the advertisement was saying correctly, it turns out they're so proud of it you can download it from their website!

Now ladies and gentleman having just seen said advertisment, I have so many words and thoughts spinning through my head as we speak that I don't quite know in what order to type them here if at all. Perhaps starting from the beginning would be a useful thing to do.

Firstly, I know what you're thinking. I'm not psychic, I'm just very good at reading people. The Westpac Bank advertising itself by saying that line is silly because we ALL KNOW this line was already used in a BusinessWeek article from 1992 about the Chicago Bank. I checked Wolfram Alpha, and this is the difference between Adelaide where Westpac aired this advertisement, and Chicago where I've divined the Chicago Bank has its headquarters: 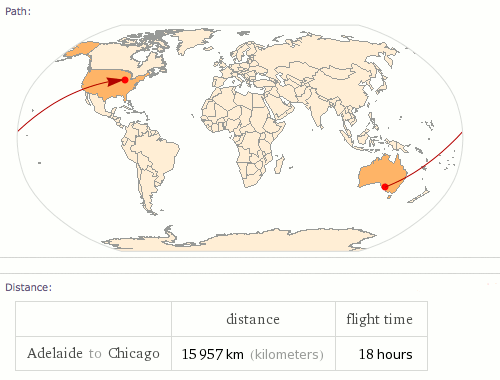 The second, perhaps more subtle aspect of this advertising campaign which you probably haven't figured out for yourself is just how needlessly unnecessary it is. Yes Westpac you're a bank, and if I do business with you I know I can bank with you. This I can figure out from the fact you're a bank, I don't need restaurants telling me I can eat their food, or the vending machines at the Mawson Lakes campus of my university telling me they'll take my change and give me nothing in return. This is to be expected. You're not crediting (HA!) your audience with much intelligence.

Perhaps the problem is Westpac is being direct and forthcoming, but they're not quite at the point where Captain Obvious swoops down from the sky to proclaim he's Captain Obvious. I suggest this slogan with a very clever pun for their next campaign.

We’ll keep your money safe, as well as in a safe.

I wonder how much Westpac paid their advertising agency for their current slogan, and whether they're kicking themselves now that they know they could have just come to Rubenerd.com and got one of equal calibre for free.