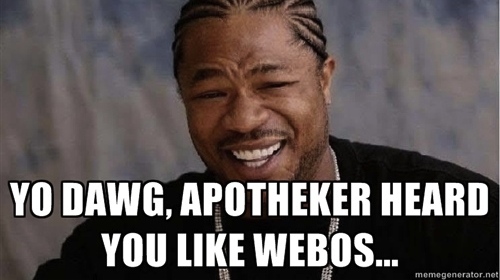 So HP are doing another run of TouchPad hardware. Was this all an elaborate marketing stunt?

I was on a roll when I made these graphics

In macroeconomic terms, dumping refers to when a company floods a new market with products at unprofitable prices in order to establish a presence. Foreign companies flush with cash are able to sustain this long enough to drive local businesses bankrupt, and are then able to own the market and set the prices. Most free market economists consider dumping to be the only valid reason for protectionism, unless they're Libertarian.

While it's tempting to think HP have done this with the TouchPad, it fails on three counts. No wait, four counts, I'm not Discovery News!

In Soviet Tablets, web OS-s you

While I'm all for looking deeper into the meaning behind corporate decisions and doublespeak, in this case I really am willing to believe HP retired Palm hardware due to a lack of sales. I've lamented this many times here given my belief webOS was the best mobile OS ever developed.