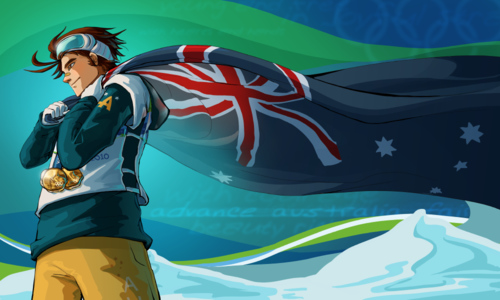 Australian Prime Minister Malcolm Turnbull has proposed lowering federal taxes, and allowing the states to collect their own income tax for the first time since the 1940s. ABC News has the details.

Normally this wouldn’t be a topic for Rubenerd! But there are two quick reasons why I think this is a bad idea.

Ditch this idea, along with the GST, and implement a simple progressive tax that doesn’t unfairly discriminate against those least able to pay it. Done and done!

The above image was by the very talented scrii on DeviantArt. Anyone that can make our ugly flag look great and highlight the clearly superior winter Olympics is a winner in my book.

For such a dry post, I was originally going to go with this adorable picture of second-best girl from Kancolle, but in this case I really didn’t have a choice about the epicness of said images. She also wasn’t wearing a one piece, so there’s little point #shot.