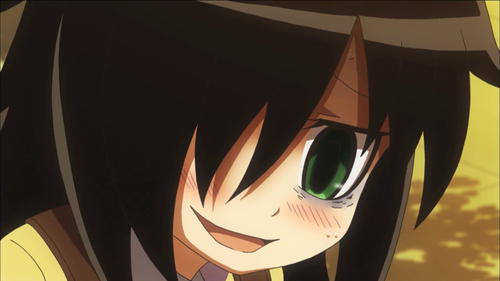 And then you have some that are hilarious because they’re true.

No Matter How I Look at It, It’s You Guys’ Fault I’m Not Popular! doesn’t just hit close to home for Clara and I, it hits home so hard the resulting rubble is indistunguishable from a pile of clay that hasn’t even had the chance to be baked into bricks yet. 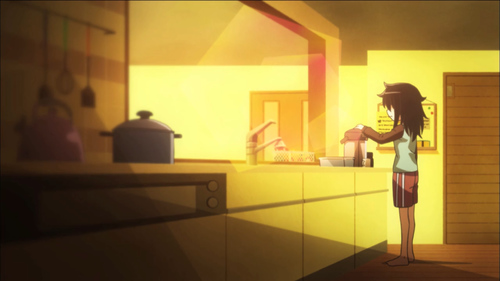 The protagonist in the series is Tomoko Kuroki, a panda-eyed otaku who spends her nights listening to drama CDs and playing video games, and the day as a walking zombie with the extreme social awkwardness of someone who’s… socially awkward.

My thing wasn’t drama CDs or video games, mine was writing code for dead platforms and developing a coffee habit all night long. Well, there was the whole going with my mum to the oncology ward early in the mornings too, but for the sake of the argument, I was a bit of a zombie myself during parts of high school too. 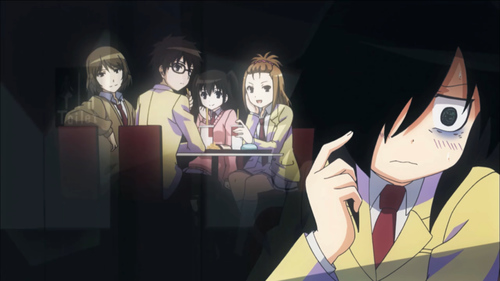 Oh, but there’s more to it than that. Rather than confront people from her school at another table, Tomoko forms elaborate maps and plots in her mind about how best to leave a fast food joint without being detected. I HAVE DONE THIS, and if you’re reading this post, chances are you have too. Don’t pretend you haven’t.

She has the attractive friend whom she’s lucky enough to still relate to, though its clear she’s moved on and got her act together. I’ve been there! 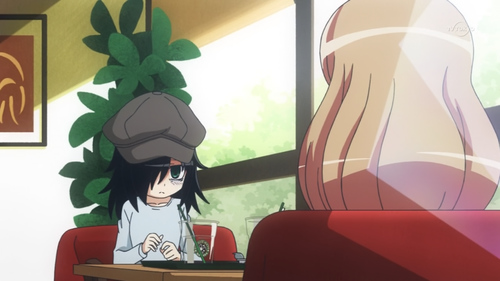 There are the little things. Tomoko rewarding herself with little treats for working up the guts to say goodbye to her sensei. That feeling when you take shelter out of the rain near a stranger, and trying not to look awkward. That soul-crushing feeling that everyone else around you is normal and having fun, and you’re not. Having physical education class, and not being picked to be on anyone’s team.

And the moral: underneath the cold, distant exterior there’s a nerd who secretly judges and resents everyone. Underneath that though, we have someone who just wants to belong, and who copes by projecting her perceived failures in life on other people. 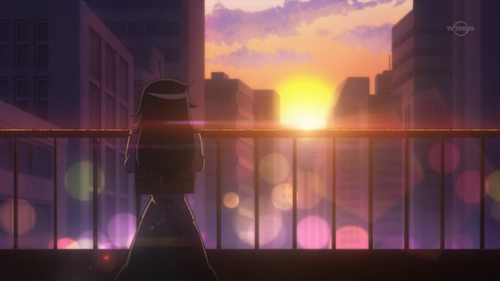 Is it a cliche? You would think. I sure thought the premise was when I read the descriptions for the series. It seems there are enough people who still think this way, and let us know about it. To each their own.

The reason why I keep coming back though: its not the slightly offbeat art style, or wild music, or clever ED, or the absolutely brilliant voice acting by Izumi Kitta. Well okay, they all play a part.

It’s because its all so true.