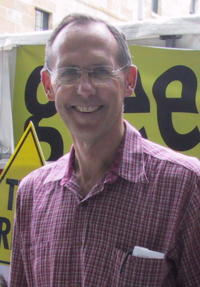 I just came back from the Australian High Commission on Napier Rd here in Singapore after casting my vote in the 2007 Australian federal elections!

If you don't know much about Australian politics, John Howard of the Liberal party (liberal doesn't mean the same thing here as it does in the United States, the Liberal party is "conservative") has been in power for over a decade now and basically acted like George W. Bush's other sidekick on most things such as the Iraq war, rejecting the Kyoto protocol, backwards views on immigration and native Australians, not to mention various scandals… and the fact he has no charisma at all which is very embarrassing when he goes overseas!

The other major party is the Labor party which shares many things in common with Labour in the UK. The leader Kevin Rudd seems to have his head screwed on a lot better than Howard especially when it comes to education and technology, so I voted for Labor #2.

But as usual I voted for The Greens as number 1, headed by Senator Bob Brown. Ever since the Democrats have faded from relevancy The Greens have been a vocal minority. Some of their stances on issues are obviously quite controversial, but I find myself agreeing with everything they do. It's like voting without your conscience getting pissed off at you for voting for the lesser of two evils when you vote Coalition or Labor.

And there ends my coverage of the Australian 2007 federal elections. All contained in one post, not bad right?