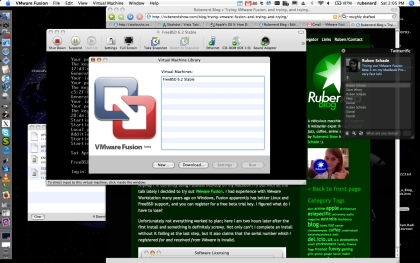 For those interested in virtualisation on Mac OS X, VMware's Fusion beta product was bumped up to version 3 last night. Amongst other improvements, the critical feature we've all been waiting for was bundled in: the ability to disable debugging mode!

From what I can tell from their website and user forum, as part of the official VMware testing process most of their beta products have a built in debugging and logging setting which allows the development team to get real world usage information, at the expense of speed of course. By allowing the disabling of this feature in Beta 3, one can assume they've reached the level of development where things are becoming more stable and closer to the final product.

From my own experience playing around with FreeBSD in a virtual machine this morning (at Starbucks over a Caramel Macchiato of course!) I can say by disabling the debugging mode it is noticeably quicker, especially in scrolling lists and so forth. I haven't yet had the chance to test out the 3D acceleration because I use Windows 2000 not XP in virtual machines. Parallels Desktop still seems a bit quicker, though I'm sure when VMware releases a mature product that gap will close.

In regards to student pricing, one of the guys on the VMware support team suggested I look into the VMware student programme which allows the licencing of their products by universities and schools and allowing those licenses to be used by students. I very much doubt my uni would be interested in such an exchange given they have their own (in my opinion very clunky!) disk imaging system in place, but we'll wait an see. Was more of an answer than I got from the Parallels Team.

At the expense of maybe sounding like an advertisement for VMware (whoops!) here's the interesting part of the email I got from them about new features: