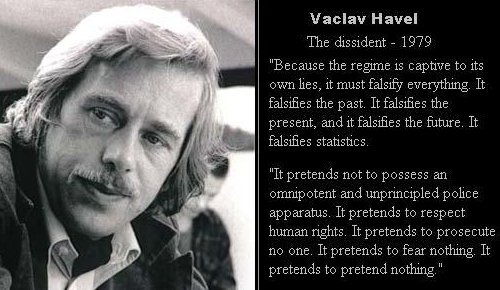 In the space of 48 hours, we lost two figures so pivotal in the post-Soviet world, or as Mr Havel referred to as "Post-Totalitarianism". The two men could not have been more different.

One worked in the Czech underground forming a resistance to Soviet influence, and left behind a peaceful, democratic, developed country with the highest living standards in the former Communist Bloc. He was an author, a playwright, a poet, a visionary, a jazz man, and a humanitarian.

The other man, was Kim Jong Il. Sadly, the recently deceased Christopher Hitchens would no doubt have had a brilliant line to describe Kim's passing. He traveled to North Korea, and often spoke at length of Kim's cult of personality. Here's hoping Korean can one day regain her peace.

Farewell Mr Havel. I'm downloading your Charter 77 to read on my Kindle as we speak.

UPDADE: Here is a transcript of Mark Colvin interviewing Christopher Hitchens about North Korea in 2010.