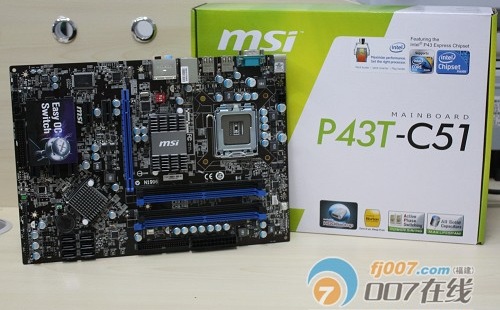 After over a year of trials and tribulations (something to do with an infestation of Tribbles) I finally gave up on the Intel DQ35JO motherboard and replaced it with the MSI P43T-C51 in my main DIY machine. The difference is stunning!

When I first built this machine in late 2008, I envisioned a headless server I could call from my aging MacBook Pro to do CPU intensive tasks such as file compression, video conversion and compiling large ports. I would SFTP into FreeBSD on it, send it the files and depending on which folder they were sent to, a cron job would either convert, compress or compile them automatically, then put them in an outbox folder I could pick up. It was pretty sweet.

I bought the Intel DQ35JO "Executive" motherboard because it was relatively affordable and it had onboard graphics; Intel graphics are universally terrible but I was using it as a server and it wouldn't even be plugged into a monitor most of the time! I used the money I saved from buying a graphics card to splurge on a Intel Core 2 Duo E8400 3GHz CPU and 6GB of DDR2 memory which at the time were still pretty pricey. 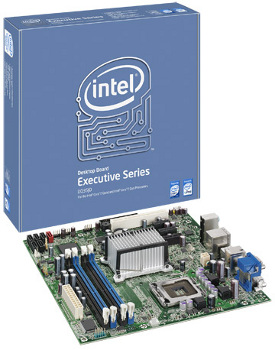 As I blogged about in detail in 2008, things didn't always go so smoothly. From the outset the motherboard seemed to be plagued with problems, so much so that I had it replaced twice. It wouldn't recognise any of the keys to enter the BIOS, it would ignore drives, drives it didn't ignore would report serious errors, the system clock would sporadically change to something that made no sense. I had an 800W PSU with just one optical drive and two hard disks so I didn't think it was due to a lack of power.

Software was also very touchy. NetBSD, FreeBSD, Slackware and Windows 2000 installed without major problems, but the Anaconda installer on Fedora 11 and 12 would report a crash before it even finished loading, PartedMagic and Knoppix would get stuck while booting, and Debian refused to recognise any drives at all. Finally, SpinRite would get stuck on the screen where it waits to access drives.

With most of the world moving to the Intel Core iX line of CPUs, I reckoned I could pick up a replacement motherboard for the Core 2 Duo for less, and I was right! Going to Cybermind at Sim Lim Square I was able to snag the last of their compatible boards with a nice discount. They're really nice people there, been buying stuff from them since I was a kid.

I swapped the Intel DQ35JO board with the MSI P43T-C51 and the difference is amazing. Despite having the same RAM, drives and CPU as the last board, FreeBSD boots in a fraction of the time and Fedora didn't chuck a hissy fit when installing. To borrow a phrase from Steve Jobs, the entire machine just feels more snappy.

As with the Intel board it comes with gigabit ethernet, a hugely generous number of USB ports (especially compared to the two lousy ports I get on my MacBook Pro!) and passable Realtec sound. As a bonus, unlike the Intel board it also comes with a decent number of PCI slots (owing to the fact it's not MiniATX) and a legacy floppy drive controller so I can use my 5.25" floppy drive! Yes I still have several, shaddup.

The only downsides other than a complete lack of FireWire ports (d'oh) is it doesn't have onboard graphics, so I had to harvest an old PCI Express card from a older machine which I hope to replace. It's my hope to use this machine as a proper desktop now instead of just a server, so I'll be on the lookout for more basic cards that FreeBSD and Fedora can support accelerated graphics on.