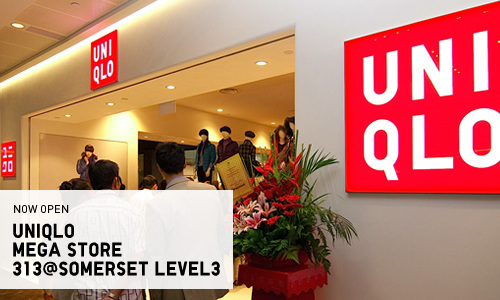 Personally, I find the act of clothes shopping to be in the same league as furniture shopping, doctor's appointments and certain university classes: they're unbearable but necessary. IKEA is the one exception for furniture in my book, and now Uniqlo is the exception for clothes!

Uniqlo is a Japanese chain of casual clothing stores that just started opening around Singapore that has made one sharp founder a very rich guy. According to their site they also have stores in Japan, China, Hong Kong, South Korea, the United Kingdom, France and the United States.

Despite what some may say about The Gap, Uniqlo is the Apple store of clothing. The stores are light, airy and there's plenty of space to move around; well that is when it's not full with Singaporeans who gravitate to anything Japanese like a bee to honey! They have a ton of stuff, but it's all dead easy to find. Like Apple stores, Uniqlo stores seems simple but it's clear a lot of thought went into it to make them that way, unlike certain Microsoft shops which are just unabashed knockoffs ;).

I know nothing about fashion but I know what I like and their range is interesting and affordable without being intimidating, if that makes sense. By that I mean I usually feel awkward clothes shopping, but I felt right at home there. Must be a nerd thing.

Lunch is one letter off Launch

Japan’s Number One casual wear brand sets yet another milestone by launching their 3rd Store in Singapore at 313@somerset, the largest in Southeast Asia on Thursday, 3 December 2009. The new store will cover up to 17,000 square feet of floor space across a single level. With an interior design reflecting an edgy, cosmopolitan feel, the new Somerset store is set to make waves in our local fashion scene by bringing you exclusive designer collaborations, such as the “+J” Collection and limited edition range of products that will not be available at their other stores.

My biggest problem when I shop for clothes back in Australia is my legs are too long in proportion to my weight, by the time I get a pair of jeans that are long enough the waist is so wide I need to wear a huge belt to keep them in place! As a result, they tend to ride down and get caught in my shoes which gradually shreds them. You've see the look.

Perhaps it's more normal for Japanese people to be tall and skinny, because I was able to buy a pair of 34 size jeans and they fitted like a glove! Yes, I found pants that are long enough, and they fit on my waist! Can I get a hallelujah? :D

And because it was on special, I picked up a white New York City bagel shirt with cute smiling confectionery. Only in a Japanese clothing store ;).

The first, the last, the everything