What does one do when bedridden, can’t eat, and are barely able to think? You substitute comfort food for nostalgia. In my case I was a rail nut as a kid, so I watched a bunch of classic locomotive documentaries on YouTube, like a gentleman.

Last week I learned that not only were steam turbine locomotives a thing, but that UP in the US ran them in revenue service. Union Pacific’s website describes the locos:

Union Pacific was the only railroad in the United States to own and operate gas turbine locomotives. The turbine, rather than an internal combustion diesel engine, drove an alternator/generator to supply electricity to electric motors mounted on the axles. Union Pacific’s gas turbine fleet totalled 55 locomotives.

The turbine fleet pulled freight trains between Council Bluffs, Iowa, and Ogden, Utah. Although tested on the Salt Lake City to Los Angeles run, their tremendous noise quickly made them unpopular in California. The locomotives were nicknamed “Big Blows” for their deafening jet engine exhaust noise. The huge locomotives, with their big appetite for fuel oil, eventually fell victim to the more efficient diesels, and in 1970 the turbines ran their last miles.

This below video on Union Pacific Turbines of the Wasatch was amazing for its VHS-era graphics as it was for the content and pacing. Modern engineering documentaries always have to have RACE AGAINST TIME with rapid-fire editing and metal music, but this was happy just to take you on a journey. 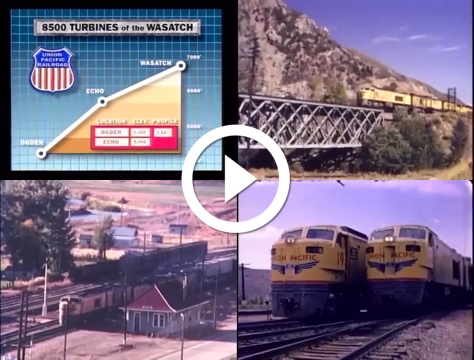 UP operated several generations of these turbines from the 1960s to early 70s on mainline freight services where they ran most efficiently. They were paired with auxiliary diesel-electrics for low speed and shunting, and ironically enough repurposed steam locomotive tenders for carrying their cheap bunker fuel. I love that they were painted in that classic yellow-and-red livery.

At the time they were the most powerful prime movers in the world, but they suffered several drawbacks. Along with the ones listed on the UP site above, the turbines couldn’t be double headed, because in tunnels the leading turbine would starve the other of air and it would flame out. Their exhaust was also so fast and hot it could melt bitumen road surfaces they passed under! And the bunker fuel had to be pre-heated and was difficult to refuel; though using tenders instead of internal fuel tanks later helped.

By the early 1970s the economic advantage of bunker fuel over diesel had also burned up, so UP retired their last turbines to the scrapheap or museums. One day I’ll make it to Illinois to check one out. 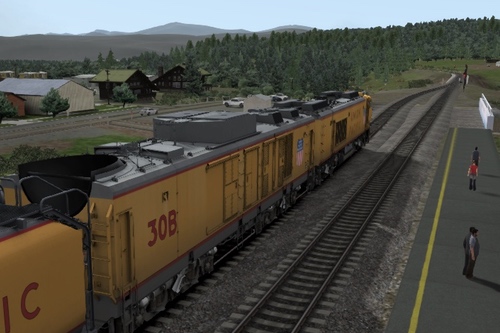 In the meantime, I realised they have the units for Dovetail’s delightful Train Simulator. Here I am driving my recently purcahsed UP Turbine through my beloved Marias Pass map in Montana. These locos never went anywhere near this part of the US, but the steep grades and long distances suit it surprisingly well. If anything, I need to check I’m not breaking the speed limit as I power up the hills with such commanding force.