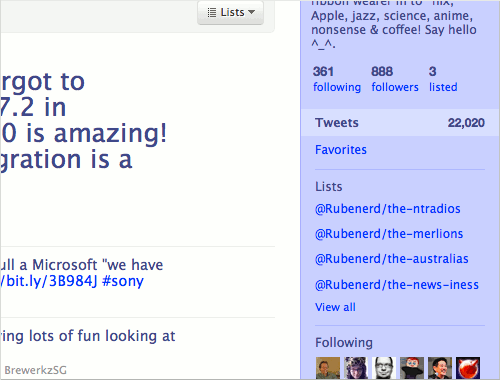 For the first time in recent memory Twitter has actually gone ahead and released a new feature that for once isn't merely the destruction of a previous feature: so-called Twitter Lists. And I love them, even if they are mostly useless in their current form.

I've been using the Groups feature in the chocolate-sounding TweetDeck for a long time now to help me organise all the trillions of tweets I get every millisecond (or some fractional amount thereof) into geographic collections that make them easier to follow, so this Lists feature seemed to be the next logical step. I wonder if the TweetDeck team will create a group export or conversion feature?

I started creating some lists this morning with my typically longer-than-necessary names. I still need to create lists for people I'm a fan of (aka: will never follow me back!), as well as for friends in Europe, Canada and the US. Perhaps it could be "the-distant-friends?"

Part of the point of Twitter Lists is allowing others to see them and subscribe to them, so ideally you're supposed to make them interesting for other people. These lists would probably only be interesting to me, but it works :).

Of all the features Twitter could have rolled out, I think this one made a lot of sense. By having basic lists become such an integral part of the service it means no longer will we be tied to specific Twitter clients with our custom groups that in TweetDeck's case require separate login credentials. For example, I'm really looking forward to having lists in full screen glory in TweetDeck on my Mac, but because I prefer Birdfeed to TweetDeck on the iPhone I'm looking forward to one day having those same lists available on that too.

Two small things that worry me about this though: first, for a mildly obsessive compulsive person like myself who's addicted to tags and metadata (evidenced by my blog's tag archive) I can see this consuming so much of my life that I may slip into a void and never return. For example, those four lists above started as eight! Secondly, the same people who are so obsessed with the number of followers they have must now also artificually pump up and abuse a new popularity metric so they continue to be CoolTM.