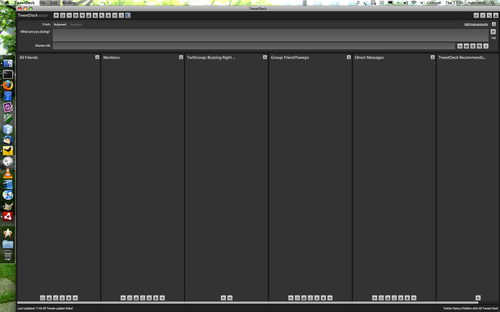 Once again the fragility of my current primary means of communication has been highlighted by it's absence. In this case it's not Twitter that's down, it's my twitter client TweetDeck. All afternoon I haven't had a single friend tweet, reply, mention, search, group tweet or direct message come through.

I liked to think TweetDeck turned Twitter from a fun distraction into a CNN replacement; taking up my whole 1920×1200 screen I can see what's happening all around the planet with my friends and current events in near real time. I've used Twitterrific, Snitter and Twhirl but since jumping to TweetDeck nothing has come close to replacing it.

As of 17:55 Australian Central / 08:25 GMT TweetDeck is still refusing to download my columns, and even attempts to re-download the client software result in errors.

Time to give Seesmic Desktop another try?