I tried Transmission (http://transmission.m0k.org/) and was really impressed. It's only 300 kilobytes in size (VERY refreshing after downloading Azureus!) and because it's a native Cocoa.app it works brilliantly, even on my ageing iBook G3 machine.

Plus I can also use it on my XFce DragonFlyBSD machine with the Linux version too, both are VERY polished programs!

And if you're a Windows user and want to give it a go… GET A REAL OPERATING SYSTEM! :D.

Below are some screenshots; I've uploaded them onto my server so I'm not leeching their bandwidth, so check out http://transmission.m0k.org/screenshots.php for updates. I don't think I need to tell you which one is running on Mac and which is on Linux ;) 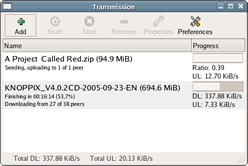