A friend sent me this fascinating visualisation from HowMuch.net. Click through to the original article to see the full resolution and some fascinating discussion. 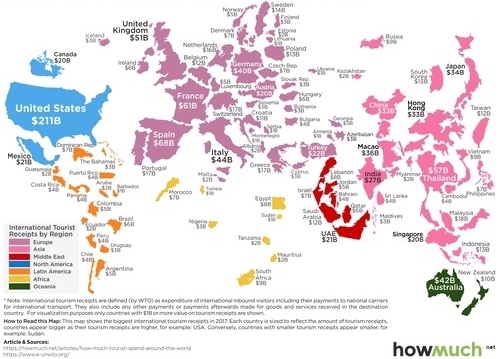 I wasn’t surprised to see the United States being the largest overall, but I wonder how that’s broken down state by state? I’ll bet New York and California would take the lion’s share, and Texas given it’s a transit hub.

Europe and Asia are the biggest clusters, though I fully expect Asia to outgrow everyone else in the next decade. And most of the heavy-hitting city states are there; pretty amazing they’re competing with countries that are orders of magnitude larger!

I wondered what a map adjusted with dollars per capita would look like, so I did some quick calcs in my lunchbox on city states, and some larger locations for comparison. I’d think Monaco and Gibraltar would be high on that list too, though they’re not on the map.