I value government integrity and I'm willing to pay for it!

This evening while grabbing a bite to eat I made the mistake of reading the Adelaide Sunday Mail. I know, I know, it was reckless and irresponsible, but sometimes I feel as though with my news sources from around the world on Twitter and predominately from Singapore I forget about more local news. Ah but The Sunday Mail tabloid newspaper has nothing to do with news… touché sir/madam.

What I did read though in the opinion section was a brief letter from someone in Hahndorf (beautiful place in the Adelaide Hills) talking about how having a registry of lobbyists won't solve any problems. Now right off the bat I don't have the faintest idea what this proposed lobbyist registry is, but I'm assuming its something lobbyists have to register with before they can pay politicians to do their bidding. Maybe? 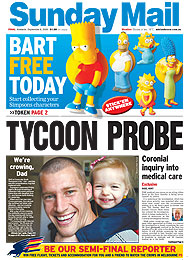 Onto the primary issue though: can anyone actually explain to me why lobbyists are tolerated at all? Isn't the idea of paying off or financially persuading a politician to advance your position in the hopes of legislation in your favour going against everything democracy stands for? Doesn't lobbying concentrate the power in the hands of the few instead of the many that democracy is supposed to be about?

I'm not a legal student, but I am an economics student (and computer science, but not sure what bearing that has) and all I see of lobbying from my perspective is the means for the rich or powerful in business to institute change or to get around perceived government "problems" in their businesses which may or may not be in place for a reason. For example, not being allowed to dump waste into rivers or allowing people to grill cheese sandwiches in areas where the population is lactose intolerant.

Leaving aside the more sarcastic answers that could be given, why is it that lobbying is legal in most democracies? Do they serve a legitimate function I'm not aware of? Am I being overly simplistic by dismissing them?