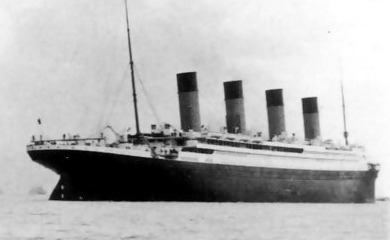 Think it's safe to say the reason why I feel like crap isn't hayfever but a very bad cold. So today I'm wrapped up in a blanket sitting on my computer chair reading and watching stuff. Somehow I got onto this page written by Robert H. Essenhigh on alternative theories to the Titanic sinking (Coal Fire Theory). I went through an art deco and ocean liner design obsession during my teenage years and they still both fascinate me.

I'd heard the sinking theories about how it was a mummy's curse, that it was because she wasn't Christened, that the Olympic was actually the Titanic and White Star sunk it for insurance money, but I'd never heard this theory before to do with an accidental coal fire. It's not an alternative theory as much as it just tries to explain some inconsistencies and holes in the accepted chain of events.

While everyone knows it was a collision with an iceberg that sank the White Star Liner on her maiden voyage, nobody knows why the Titanic was sailing full steam through a known iceberg field at night. Coal’s tendency to ignite and smoulder while stored may provide the answer, says Essenhigh. There are records that there was such a fire in the Titanic’s forward bunker #6.

I'd always thought the speed argument was a bit dodgy because the Olympic class of ships were built specifically for comfort and not speed, and Essenhigh seems to agree, though perhaps with more certainty than I would have put on it:

The crew of the Titanic couldn’t have been trying to break any records […] because according to the published records the Titanic was built for comfort, not speed.

[…] because of a miners strike, there wasn’t originally enough coal on the ship for sailing at full speed and the original plan was to sail at half-speed and take it easy. […] Historical records show that on leaving dock each of the six of Titanic’s coal bunkers were only about half-full with 800 tons of coal.

It turns out that spontaneous coal fires were not that uncommon at the time, and that a fire thought to have been put out could start again during a voyage. If this had occurred on Titanic, what would have the stokers have done?

The standard technique for controlling and eliminating such fires on steamships was to increase the rate at which the coal was being removed from the bunker and put into the steam engine boiler in order to increase the rate of draw-down of the coal pile, Essenhigh explains. When the firemen reached the smoldering fire they would just shovel it into the boiler and the problem was solved.

Of course, all that shoveling makes for a lot of steam, resulting in the need to increase the steaming rate and quicker cruising.

It’s very speculative, Essenhigh admits. But not far fetched. Smoldering fires in piles of coal even today is a common thing, and there are even records from fire control teams at the ports of Southampton and Cherbourg that such a fire was burning onboard the Titanic.

I haven't seen any corroboration so I'm hesitant to believe it as is, but it's still a really interesting theory. Perhaps there's more to all of this than we thought.