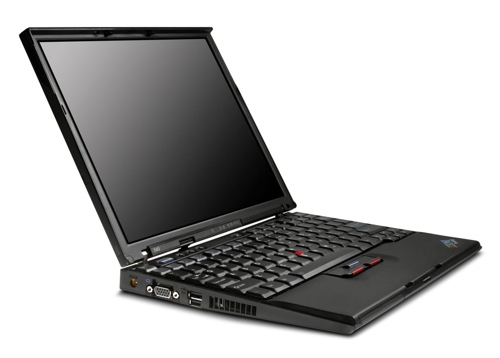 I'm typing this post as we speak on my second hand IBM ThinkPad X40 and I have to say I'm thrilled with it! While obviously larger in dimensions than a netbook, I just can't get over how light it is. I put it in my bag I usually haul my 15 inch MacBook Pro in along with my folder of study papers and as I carried it to the Boatdeck for my morning cup of coffee the bag felt like there was only the folder in it!

The machine currently has Windows XP Professional installed and even has the genuine OEM licence sticker on it. Given I'm not sure how much Windows software I'll need to run for my studies in the future I've decided to shrink the Windows partition and put FreeBSD on it with a boot menu.

The main thing I was worried about was the tiny 1.8" ZIF PATA hard drive, I had read plenty of stories by people claiming the 4800RPM drive is noisy and has slow seek times but it booted XP pretty quickly and loading applications didn't seem to take too long at all. Given this is a second hand machine I will be running SpinRite on the drive before I put any data onto it to triple check that it's functioning properly.

Even if the internal drive turns out to be working flawlessly, once I've got a bit more money I will be looking into a replacement if only to protect myself against errors that I can't see right now. 1.8" ZIF PATA drives are uncommon but not too difficult to find, 60GB Samsung drives seem to be going for around $80. Another option is Amazon.com stocks 1.8" ZIF PATA 16GB SLC drives for US$140 which is way too steep for my budget but could be something I get in the distant future if I still have this machine.

As for the other features, I've been using it lightly for half an hour and the bundled battery still reports a 90% charge which is pleasantly surprising! I was also able to connect to our WPA2 secured AirPort WiFi network at home without any problems, the next thing to test will be whether it can use my university's VPN.

I don't intend to spend much money on this machine but I did pick up a few replacement mouse stick caps for a couple of bucks, and a 12.1" screen protector for another few bucks at the Mawson Lakes Apple shop of all places.

I got me a ThinkPad netbook! Boo yah!