With all this Commodore talk of late, you’d think I have no interest in any other vintage tech. I have namedropped my Pentium 1 tower a few times though, and as a Centronics parallel project (ah, so good), I’m restoring that machine as well to run an assortment of 16-bit OSs. She was my first computer, and restoring her to full working glory has also been a fun and rewarding journey.

The machine’s 1997 Rhino 12+ board is fascinating. It was released right on the tail-end of the AT standard, with most peripherals requiring ISA or PCI cards. It has a physical toggle switch for power and an AT keyboard port in lieu of PS/2, but it also has USB which is bizarre. I can’t imagine there are many boards with this specific combination, like finding an electric car dashboard that can deliver WAP via IR to a PDA.

For one evening exercise, I wanted to know if the Rhino 12+ board supported a few different things, and funnily enough the Data Sheet Archive had a copy of the technical guide for the VIA VT82C586B PCI controller. The pinout diagram is fascinating, and eye-opening after looking at Commodore 6510-compatible ICs from a decade earlier: 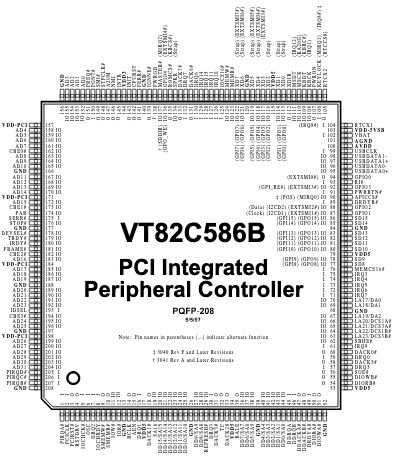 I also learned some surprising things:

My Commodore projects are taking priority right now, but I hope to write more about this beautiful old DOS/Windows 95/NT/BeOS/Red Hat/FreeBSD computer at some point. I’m coming to 8-bit computers after the fact; this machine was my first one :).