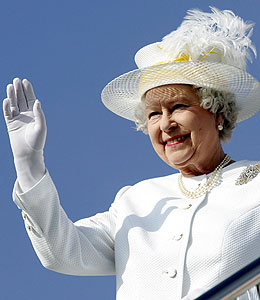 Just finished watching the Queen's official opening of the new extention of the Sydney Opera House. I think Channel 9's reporter on the scene said it right: that in the future Australia will become a republic, but for now the Queen is our head of state, she looked great and she put a lof of effort into coming in, so we should give her our support.

I'm a self-confessed Australian republican, but I admit seeing the Queen there was pretty cool, espcially seeing as she's touching 80 soon!

Once Prince Charles becomes king, I think that will be the right time to be a republic… King Charles of Australia? ARGH!