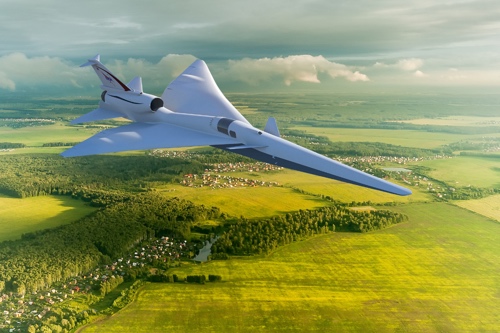 I was ecstatic to sit in the cabin and cockpit of Concorde in 2016; albeit one on static display at the Intrepid Sea, Air, and Space Museum in New York. The idea that commercial supersonic planes would ever fly again in my lifetime seemed impossible.

There have been economic reasons precluding further development, but noise was as big a factor. Sonic booms generated by Concorde limited it to flying over the ocean between coastal cities; relegating it to New York to London and Paris over the Atlantic. The same route as the ocean liners of yore that I will also likely never get to experience. No Blue Riband runs for me; it’s a tough, tough life.

NASA’s newest experimental aircraft, designed with quiet supersonic technology and intended to help open a new era in faster-than-sound air travel over land, will forever be known in the history books as the X-59 QueSST. [..]

Now under construction by Lockheed Martin Aeronautics Company at its famed Skunk Works plant in Palmdale, Calif., the X-59 QueSST is designed so that when flying supersonic, people on the ground will hear nothing more than a sonic thump – if anything at all.

I’m fascinated to see how they pull this off. Presumably one can’t just pull off sonic boom from a plane; it’ll take engineering prowess and ingenuity to accomplish its removal.