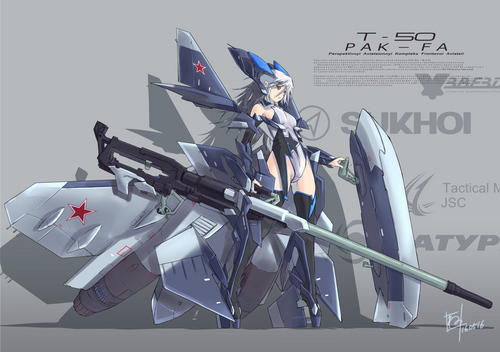 From the artist’s commentary:

Japanese doesn’t come quickly to me, but I believe that translates to “absurdly awesome, and Ruben is too.” Laying it on a bit thick, but there you have it.

My vast store of useless information concerns commercial aviation, but I recognised the name Sukhoi from their new commercial jet. According to Wikipedia:

The Sukhoi PAK FA [..] is a fifth-generation fighter programme of the Russian Air Force. The T-50 is the name of the prototype aircraft (though it is unlikely it will be the name for the production aircraft) designed by Sukhoi for the PAK FA programme. The aircraft is a stealthy, single-seat, twin-engine jet fighter, and will be the first operational aircraft in Russian service to use stealth technology. It is a multirole fighter designed for air superiority and attack roles.

This is not to be confused with a bicycle, which can only perform a subset of these tasks, or a larger subset if safety isn’t a concern.