Last year I wrote about buying a Microsoft Ergonomic Keyboard 2019. I was inintially underwhelmed by the predictable mushiness of the keys, but it became noticably better after breaking in with frequent use. The difference is stark when pressing lesser-used keys on the right.

I had two reasons for getting it. I wanted to address some immediate wrist discomfort, and to see if a split keyboard worked for me without splurging on an expensive piece of kit. It achieved both, only now I’m in less of a hurry to replace it than I thought. It just works, and feels fine.

That said! I do keep an eye out for alternatives if and when they surface, and I just saw the Maja 2 by Vulcan and KBDFans: 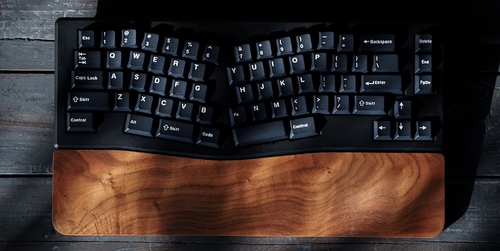 It has a split keyboard design, a proper set of cursor keys, and a cluster for Insert, Delete, and Page Down (though curiously not Page Up). The physical arrangement looks a little haphazard, but it means a minimal number of custom key shapes need to be created to achieve the split design. The caps also look like they can be customised, so I can add hiragana if and when I pick up Japanese again.

The great thing about indie split keyboards is that they’re willing to experiment with modifier keys, something the conservative Microsoft keyboard doesn’t have the freedom to. Note the position of the control and shift keys near the spacebar in the photo above. I suspect this would do as much—if not more—to help reduce strain than the split itself.

My main gripe is a lack of a slope. I think the split design has been more important when using the Microsoft board, but I do notice I’m holding my hands at a more comfortable angle now that I watch myself type on it, compared to placing my hands on the Commodore 128 sitting next to me. I think?

Mechanical split keyboard fans, do you think slopes are important or is this a placebo?