This Music Monday will be different from what I normally share here, but I like being (un)predictable like that. Today I’m reviewing the Kos Porta Pro X headphones which recently arrived. They have no business being this good, especially for the price.

The AKG K55x series are my favourite headphones of all time. They sound so crystal clear I was hearing instrumentation in my favourite songs I never knew existed. Their giant 50mm drivers are surrounded by pillowly-soft cups which make them a pleasure to wear, and naturally block out outside noise. But they’re expensive, too big to carry around, and as I unfortunately learned during our last house move, they’re far more fragile than I appreciated.

My audiophile colleague knew I was in the market for a new pair of affordable headphones that included an inline mic for our working-from-home world, and recommended the Kos Porta Pro X. I ordered mine a few months ago, and they finally arrived along with my other old Walkman gear I’ll talk about soon. 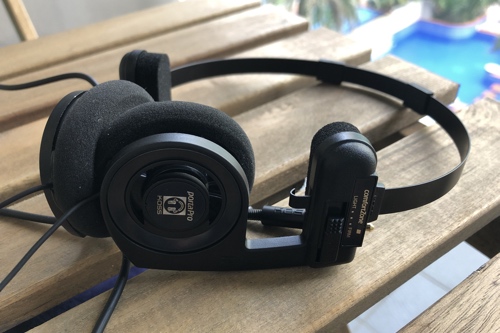 They look like something from the 1980s because they are; albeit updated to be more durable according to Koss. This is a huge tick in my book given my penchant for nostalgia. The entire assembly folds in on itself and clips together with a small hook, which can be put into the protective bag it ships with.

Given their size, weight, and price, the sound is wonderful. Brass in jazz sounds especially bright and cheerful, and vocals are clear. They’re too bass heavy for my tastes, but curiously it doesn’t rob the headphones of any discernible clarity. I adjusted the equaliser in iTunes to reduce lower frequencies and keep the rest static to get the sound profile I like.

Bass aside, they sound far better than any headphones I’ve tried off the shelf in stores, including ones that are double the price.

Ergonomically they look like they’d be as uncomfortable as those awful headphones you get on aeroplanes—remember travel?—but they feel surprisingly comfortable. The size can be adjusted by sliding the top piece in and out. In addition to the ear cups, they also include adjustable secondary “comfortZone” pads which cushion your head above your ears. Now that I’ve used headphones that have this, it feels weird not having them on others.

The 3.5 mm headphone jack strain relief is a proper metal coil which is a nice premium touch, and the cable splits in a fixed position a quarter of the way down with a sturdy Y thingy, to employ technical nomenclature. The model I got included the inline mic, which I’ve been told by colleagues works as good as the wired Apple earpods I was using for conference calls.

I ordered mine from Drop (ne. Massdrop) which are priced lower and come with the inline mic as standard. I love these things!