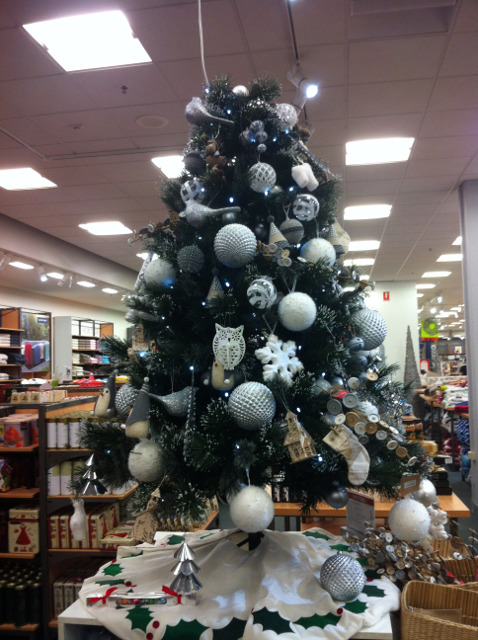 While killing a little time in the Hornsby Westfield shopping centre this afternoon, Clara and I decided to check out the holiday decorations in Myer. We were surprised to see a Yule tree seemingly missing its top, and joked about it on Twitter.

If I were superstitious, I'd almost say someone was listening. While nothing compared to the natural disasters in the Philippines or the US of late, my Sydney suburb soon after endured quite the freak weather show. Wild winds uprooted trees and crushed cars, smashed the roof of the huge Westfield shopping centre in several places, and even flipped a demountable. Trains stopped, traffic was brought to a standstill.

A mini tornado was to blame, according to The Austrailian Bureau of Meteorology. Whatever it was, we were lucky to be back home after leaving the shopping centre less than an hour before all the damage struck. Photos from the scene were pretty scary.

As @yaakov_h said on Twitter, Australia has had ALL the weather of late. Less than a month ago, Sydney endured a heatwave and winds so strong it triggered bushfires that were reported around the world. Now as I sit here studying for my final exam of the semester, I can hear more violent rain lashing the windows. Luckily we were able to give Clara a lift home!

HansOrph is selling Hornado tshirts. I have to say, I'm tempted.