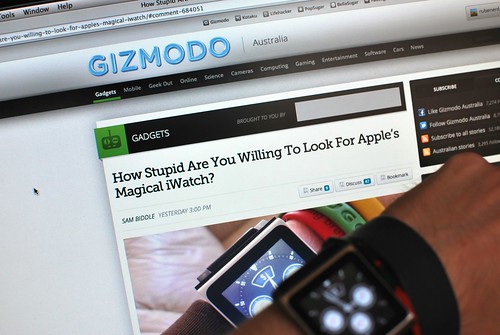 While checking some replies to my Rubenerd_blog account, I noticed I got some feedback from Gizmodo Australia for their inflammatory blog post that included a photo of me under the headline saying I’m willing to look stupid.

@Giz_au: Hey mate. I haven’t deleted your comment. If we had, we’d see it there as deleted.

@Giz_au: Second, your image is CCBYSA2.0 and if you don’t want it used you should change that

Yes, and if you want to use share-alike images, you need to change Gizmodo Australia to use that same (or equivalent) licence. Otherwise, “you should change that”.

But that’s beside the point. My objection was the tasteless, inflammatory article itself. Arguing over a technicality (which you even got wrong) when the issue is calling someone stupid is even less classy.

@Giz_au: Third, I own an iPod Nano watch myself, and love it, I get the attraction. It was a chatroom post

You shot who in the what now?

@Giz_au We don’t think you’re stupid at all.

Could have fooled us with that headline.

Anyway, I’m done with this and moving on. It’s my fault for expecting more from Gizmodo.