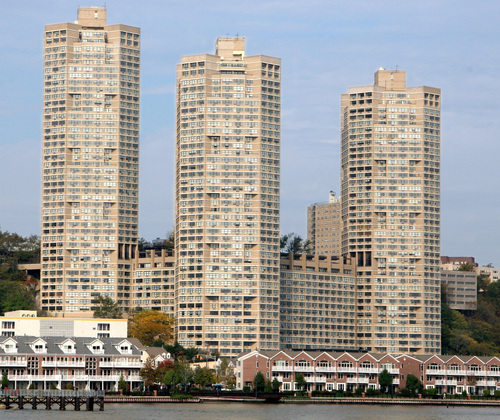 Today I learned of the Galaxy Towers in New Jersey, in the eastern United States:

Galaxy Towers [..] are a trio of 415 feet (126 m) octagonal towers located at 7000 Kennedy Boulevard East in the southeastern corner of Guttenberg, New Jersey, United States, overlooking the Hudson River. The towers were built in 1976 [..]

I love Brutalist architecture. As opposed to so many modern buildings that pretend to be interesting with painted-on lines and coloured cladding panels—many of which are a fire hazard—brutalist buildings and those fashioned in a similar style were unabashedly utilitarian. They’re also such a snapshot in time now.

Thanks to Alexander Krivenyshev for the photo and uploading it to the Commons.