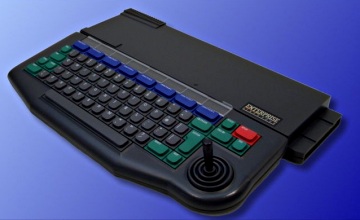 Now because my dad was working on IBMs at work since the early 1980s all of our computers at home were IBMs (and later compatibles) until I moved to Apple in 1999 when the Windows crashes were starting to affect my ability to maintain my sanity. Yes I know the latest Apples are x86s. Anyway the reason why I say this is because from the beginning we had IBMs at home, no Amigas, no Commodores… we were business machines all the way.

I had never even heard of the Enterprise 64 or 128 until I saw the image on Google Images. It was in Spanish so I went over the the venerable Home Computer Museum (English version) and came up with the machine' vitals:

If it had a Zilog Z80 chip, was it capable of running CP/M? That would be wicked!

Reading a bit further I found out one of the defining features of this machine was the abnormally large number of expansion ports. To save costs the ports weren't actually sockets, but rather just exposed parts of the mainboard with gold contacts.

You can see diagrams of the ports at Museo8Bits, as well as the original advertising for the machine:

Blast from the past! I'm off to dust off the Commodore 64c from the storeroom… from eBay a few years back!