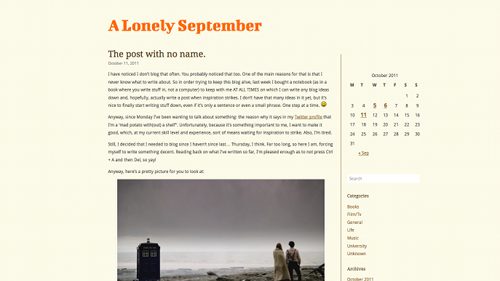 Fewer of my friends are blogging now than ever before, which is a shame. In the spirit of friends helping friends, I've decided every now and then to share some blogs from people I read and enjoy, and that perhaps you should be reading too, in the hopes that perhaps it'll help reverse this trend :). Today we look at A Lonely September.

I first met Sebastian during a screening at the UTS Anime Club. He was substantially taller than me, with masses of light blond hair and a French accent so strong I couldn't understand a word he was saying. After reminding me I wasn't wearing my glasses, I put them on and realised he was in fact shorter than me, with dark coloured hair and sounded as French as me. Which is to say, not at all.

Even moreso than me, Seb (as he friends call him) is a worldly soul. Originally from Lima, he's an Australian citizen with ancestors originating from Peru, Spain, Holland and China according to his about page.

This is where I first ran into some serious issues. Holland of course refers to the specific area of The Netherlands, but many English speakers use the term to refer to the entire country. Is his ancestors specifically from the area we now know as Holland, or was he just referring to The Netherlands?

It only gets worse with China. While most people associate China with the People's Republic of China, the Republic of China that predominantly operates from Taiwan also considers itself the sole legitimate government of China, and even maintains the original Chinese characters instead of those simplified ones that are easier to write but look infinitely less cool. Which one is his ancestors from?

Should we be concerned that he intentionally obfuscated his origins? Is he involved in some dodgy business dealings that necessitate such shady writing? 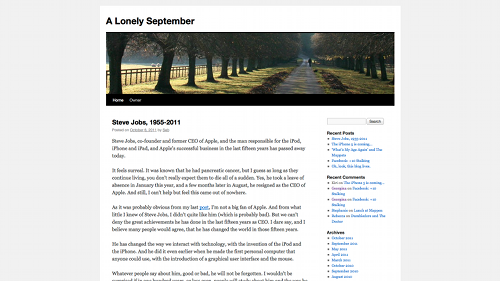 But we're getting ahead of ourselves here, or ahead of his blog specifically. Perhaps in an attempt to render me foolish in the eyes of others, I was in the process of taking a screenshot of site, uploading it, and putting it here for the world to see, but no sooner had I done this but he quickly changed his blog theme. Whereas before he used the Twenty Ten theme by the WordPress team, he now appears to be using San Fran, a theme presumably named after San Francisco where those cable cars and fog are.

Ahah! FOG! He's clouding our judgement, you see. I'm on to you Sebastian, you sneaky, sneaky devil you.

My second issue had to do with his server reliability. Upon entering his URL into Firefox and pressing the ENTER key which is located imminently to the left of the keyboard's edge under most circumstances, I was presented with this error message:

Now I hear what you're saying. Ruben, it's entirely your fault, you didn't spell his domain name properly. While this is entirely true, I fault Sebastian entirely for this. If you're going to have a domain name, the least you could do is register every conceivable misspelling of it to redirect to the real address. With domains costing less than $20 a year to register and maintain, Seb could solve this problem for the low, low price of a few thousand dollars a year.

As I've written above, A Lonely September is a great read and consists of prose and wit that far eclipse mine: I have every confidence he can fulfill his dream to be a writer ^_^. Wait, did I write that above? Never mind, I intended to put it in there, and intentions are everything.

He's been running the site for over a year now, and I look forward to the next one :).

Disclaimer: This post was written Tuesday morning, but was only published Tuesday evening due to workload, a gigantic headache, alien invasions and the like.