I thought back this morning to the first American election map I ever watched. My high school friend Felix and I had my iBook G3 open at a Coffee Bean while we lived in Singapore, fingers crossed for John Kerry. It seemed all but assured given Bush’s international respect was non-existant, and his bumbling had become such a source of ridicule.

That’s when I learned that domestic popularity was entirely different. Ah, to be that young and innocent. 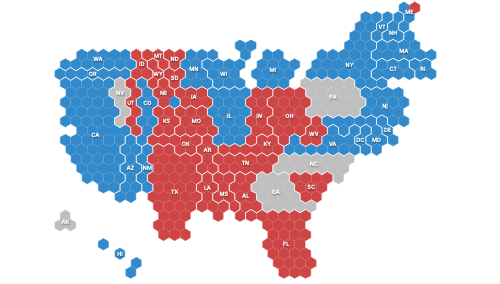 But I digress. I’ve tried hard to avoid news about the current election this time around. I already feel too emotionally invested in the outcome, especially in this Covid climate. But every now and then I refresh the Australian ABC’s graphic above, which I think does the best job of any I’ve seen putting all the electoral college votes into perspective.