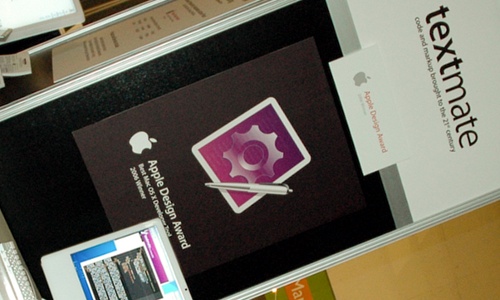 The question seems to come and wane, but checking up on my long neglected TextMate newsgroups I uncovered a conversation regarding the future of TextMate 2. Again.

I've tried a lot of editors. On my Mac, I've gone from Smultron, to TextMate, MacVim, to JOE, another brief flirt with nano, and back to TextMate again. Vim is now my editor of choice for most work, but for projects nothing beats TextMate on the Mac. Allan Odgaard won an Apple Design Award for the software in 2006, and rightly so. It Just Works™.

In 2006, we got our first glimpse of the future 2.0 release on the official MacroMates blog:

I should also add that I am taking 10 weeks of vacation starting the 29th of November (going hiking in New Zealand), so even if I didn’t drop backwards compatibility, I wouldn’t have a 2.0 release before Leopard.

Little did we know that by that he meant before Leopard, Snow Leopard and Lion. Discussions about garbage collection in Objective-C 2.0 seem so distant and quaint now… remember how excited we all were about that? Those were the days :).

After years of talk about the improved features, in 2008 Allan stopped posting on his blog entirely, leading to an alleged torrent of questions about the project's direction. Finally, Allan responded with a new post entitled Working On It:

Over the past two years, posts on this blog have slowed to just a trickle, and a number of TextMate users have asked about TextMate’s status, or publicly worried about its future. This blog post, the first I’ve written here in a long time, is an attempt to assuage those concerns and answer some of the most frequent questions.

So where does development stand for 2.0? It feels to me like most of the modules are getting close, say 90%. But as they say, on the horizon, mountains look small. While I use 2.0 for my own work, day-to-day, and the basic infrastructure is pretty solid, much of the front-end still needs work, and for now it’s all lacking the spit and polish of a finished app. Hopefully an alpha version will be ready before too long, but I can’t make any promises about dates.

After a few more months with little communication (somewhat justified given his social anxiety, but little communication nonetheless), rumours began circulating that the software was vapourware. A few threads on Digg (I presume, but I don't go there!) and Reddit were started, and the software was even featured unceremoniously in fifth position in Wired Magazine's Vaporware 2009 piece.

But it’s also been stuck in 1.x limbo for years. Lead developer Allan Odgaard got so tired of answering the barrage of questions about TextMate 2’s release — including from those wondering if it would ever arrive — that he broke months of silence by posting a long sob story on his blog titled, "Working on It."

The fall 2009 release of Snow Leopard brought more compatibility setbacks. It is perhaps no coincidence that Odgaard’s chosen tagline for his app is “The missing editor for OS X.”

As I said in the introduction, TextMate has the mix about right for me. It works, I'm used to it, I have my own bundles, everything is peachy. Well, almost. For one thing it is a little unstable at times. The lack of wide character and true UTF-8 support is becoming a bit of a joke, and renders it useless for writing blog posts here that often have Japanese characters in them (anime posts and the like).

I've being doing a lot more work in Vim lately, and have recently rediscovered the NERDTree plugin, perhaps its finally time to think about moving over to it. Alternatively I could try using emacs seriously given TextMate was inspired by it… heck, I want a new email client too and emacs can do everything, right? ;).

I hope life is treating Allan okay, and that he doesn't lose too many people from this TextMate limbo.