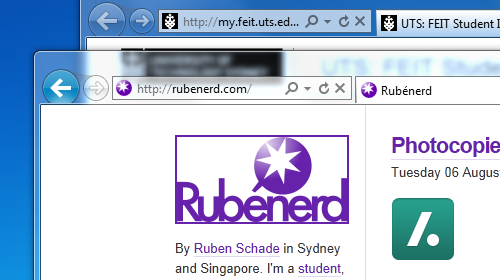 It used to be that you’d develop a site to work the way you want, then you’d load it in Internet Explorer and spend the rest of your development time fixing all the differences.

I’ll admit, this is the first time I’ve deployed a rewritten site without testing it in IE first. If it were for a client it’d be another story, but for my personal site it’s got to the stage where it doesn’t bother me as much any more.

This evening, I had a few hours at UTS, and decided to use one of the Windows lab computers to test my site here in Internet Explorer. The lab machines run Windows 7 with Windows Internet Explorer 9; not the latest version but I was hoping it’d treat me kindly. I loaded the page, gritted my teeth and crossed my fingers.

Micraculously, the page looked and worked surprisingly well. During the time I stopped using Windows in any production capacity, IE seems to have improved a great deal.

Of course, there were still a few outliers:

Internet Explorer 10 might resolve some of these issues further. For now, I’ll just write a small IE specific CSS file and fix these bugs. TL;DR I’m cautiously impressed with how it turned out.