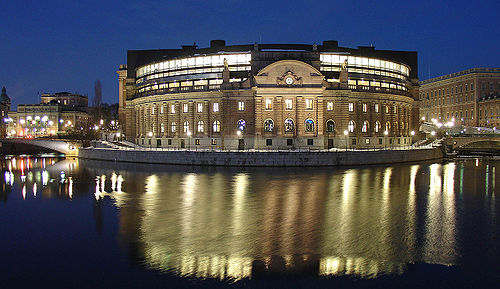 Photo of the Swedish Riksdag by User:BillC on Wikipedia

I'd just like to take this opportunity here on my humble blog to congratulate the Government of the Kingdom of Sweden for overwhelmingly passing a resolution allowing same sex marriage! This is a huge step forward for LGBT rights and yet another sign that Sweden and her people get their progressive and forward thinking reputation for a reason. Their government even has an official human rights website.

Sweden now joins the ranks of other enlightened countries such as The Netherlands, Belgium, Spain, Canada, South Africa and Norway, as well as the US states of Massachusetts, Connecticut, Iowa and Vermont.

Flags of the European Union and Sweden, from the Swedish EU Presidency site