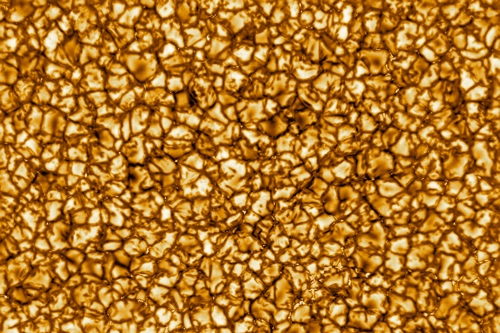 Speaking of things I tweeted recently, this image is one the most incredible things I’ve ever seen, couresy of the National Science Foundation in the US. The surface of the sun looks like golden animal skin.

The Daniel K. Inouye Solar Telescope has produced the highest resolution image of the sun’s surface ever taken. In this picture, taken at 789 nanometers (nm), we can see features as small as 30km (18 miles) in size for the first time ever. The image shows a pattern of turbulent, “boiling” gas that covers the entire sun. The cell-like structures – each about the size of Texas – are the signature of violent motions that transport heat from the inside of the sun to its surface. Hot solar material (plasma) rises in the bright centers of “cells,” cools off and then sinks below the surface in dark lanes in a process known as convection. In these dark lanes we can also see the tiny, bright markers of magnetic fields. Never before seen to this clarity, these bright specks are thought to channel energy up into the outer layers of the solar atmosphere called the corona. These bright spots may be at the core of why the solar corona is more than a million degrees. Credit: NSO/AURA/NSF

There’s so much going wrong with the world right now, but I still feel honoured and privileged to be living during this time. We’ve seen the sun this close, and only a few years ago saw the heart on Pluto that our ancestors didn’t even know existed. Science is beautiful.