(Update 2021: I wrote this trying hard to be optimistic and open-minded. Suffice to say, is a phrase with three words). 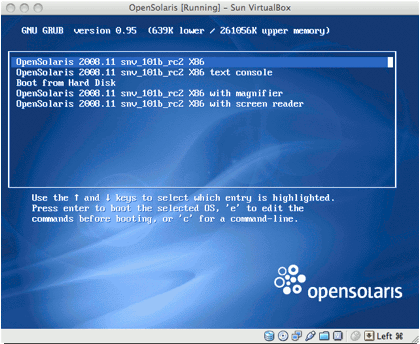 Showing my support running OpenSolaris in VirtualBox on my Mac :-)

Well it's official, Sun Microsystems found a suitor not in IBM, Apple or Microsoft, but with Oracle. I must say on the whole I'm cautiously relieved, though there are some things that worry me. What an ambiguous sentence. Well you know what they say, certainty is hobgoblin of the fool… right? Wait, that's not how it goes.

Firstly, Java and Solaris absolutely make sense for Oracle; I believe I read somewhere that (paraphrasing) Larry Ellison claimed Solaris was the most effective Unix system out there for use with Oracle infrastructure. I haven't played with OpenSolaris (or Linux for that matter) to the extent I've used FreeBSD but I was really impressed by it's completeness and quality. I'm also interested in licencing; as a BSD guy the CDDL that has prevented Linux users from adopting ZFS and Dtrace hasn't bothered me but Oracle's work with Linux may see it change to the GPL… maybe.

What I'm also interested in is Sun's free and open source acquisitions and assets, namely NetBeans, VirtualBox, OpenOffice.org and MySQL. If they keep them and continue to support them I don't see any problem, and one could argue that said projects would benefit from being part of a larger company in the same vein as Linux at IBM. Some brainstorming on each:

I've done work for Oracle in the past but I still don't know the inner workings of the company or the details regarding merged product lines (ala PeopleSoft and Siebel). Whatever the outcome, I'll be watching closely.

As I've said here before I have huge respect for Sun and have always wanted a pimped out Sun Workstation to really get stuck into Solaris. In fact if I were offered a Mac Pro or a similarly high end Sun Workstation I'd take the latter just because I've used them at university but ave never had one of my own before!

I wish Sun the best in this transition period.